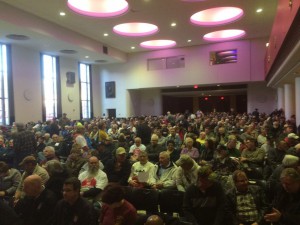 Nearly 1,000 Teamsters and Teamster Retirees packed Coffman Memorial Union at the U of M Tuesday to urge U.S. Treasury Department Representative Ken Feinberg to reject proposed cuts to the Central States Pension Plan. The meeting, conducted by the Treasury Department, was part of a series of public forums being conducted around the country prior to a decision being made on whether the Treasury will approve, modify, or reject the proposed cuts.

Mr. Feinberg began the meeting by assuring retirees that their voices would be heard, as well as acknowledging that there have been concerns raised by many groups and individuals surrounding the cuts proposed by the Central States Pension Plan. One of the most powerful objections, according to Feinberg, came from the International Brotherhood Teamsters. (A link to the letter can be found here)

Local 120 has been a leader in the effort to oppose the proposed cuts, conducting meetings, encouraging members to support their brothers and sisters who may be affected by the cuts, and even filling four buses from the Union Hall Tuesday to make sure the Treasury Department heard the message loud and clear.

“We are absolutely committed to organizing, mobilizing, and advocating for the people who may be affected by these cuts,” said Local 120 President Tom Erickson. “The administrators of the Central States Plan did not do the right thing here. We are counting on the Treasury Department to send them back to the drawing board and counting on Congress to meet their obligation to the PBGC by passing the ‘Keep Our Pension Promises Act’.”

John Murphy, an IBT Vice President appointed by General President Hoffa to spearhead the International’s opposition to the cuts, has been present for virtually every meeting since the public comment period began and said that the tone in Minneapolis was similar to the sentiment all over the country.

“The response has been overwhelming urging the Treasury to reject these proposed cuts,” said Murphy.

The Treasury is set to make their decision on the proposed cutbacks by the first week of May. If you were unable to make the meeting, you can urge them to reject the cuts in writing by following this link.