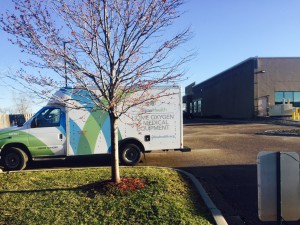 Local 120 members at Allina Health Home Oxygen and Medical Equipment have given management the legally required notice of their intent to conduct a work stoppage on Monday April 11th.

The Allina Local 120 members voted unanimously to authorize strike action on March 19th after three bargaining sessions yielded minimal progress. The notice was given this morning at roughly 1:30am after a nearly 15 hour bargaining session failed to produce a new agreement for the contract that expired at midnight.

“It was disappointing that management decided to walk away from the table, we were (and are) ready and willing to continue bargaining to try and avoid a strike,” said Joe Hackett, one of the three Allina Stewards.

The Teamster committee cut their economic proposals by more than half in an attempt to reach an agreement. Management responded by offering wage proposals that will likely not even keep up with inflation and a subcontracting proposal that would allow them to give away work currently being done by Local 120 members.

Local 120 President Tom Erickson said that the Allina bargaining unit has the full support of the local. “This is a company that makes profits around 300 million dollars a year and calls themselves a ‘non-profit’ to avoid paying taxes. This local is behind our members at Allina 100%.”

Steward Chad Ludwig summed it up nicely: “Our bargaining unit is 100% united, we know where we need to be, and we are ready to take the next step on April 11th if necessary.”