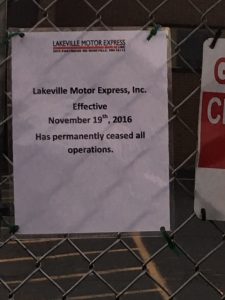 Roseville, MN- Over 100 families in Minnesota and South Dakota are wondering how they are going to make ends meet after showing up to work this morning at “Lakeville Motor Express,” a Roseville-based trucking company, only to find a sign on the door saying that the company had permanently closed. It is not uncommon for new companies to open and old ones to close, but the circumstances of this closure have many crying foul.

“It didn’t close, the freight is still there, the trucks are still there, the customers are still there. All they did was change the logo on the trucks. Now they are saying they won’t even pay the employees for work they had already done or benefits that have been accrued and are owed,” said Teamsters Local 120 Business Agent Virgil Christoffersen, who represents roughly 90 employees who worked for Lakeville Motor Express.

Earlier this fall, Lakeville Motor Express executive Travis Hoeschen started a competing company called Finish Line Express (FLE). Over the past several months, trucks, customers, and property have been siphoned off from Lakeville and moved over to FLE. Many customers have told Local 120 that they had called Lakeville Motor Express and were sent an FLE truck instead.

“They are doing this to undercut labor costs and drive down the entire market. Every step of this has been done in an underhanded and dishonest fashion. The icing on the cake, that we should all be outraged by, is that there are over 100 families who, without notice, are all of sudden wondering how they will get by, how they will put food on the table at Thanksgiving, and presents under the tree at Christmas,” stated Bill Wedebrand, Secretary-Treasurer of Local 120.

Local 120 President Tom Erickson vowed that the Union would pursue all legal avenues available to stop this kind of business strategy from working: “If what they did isn’t illegal, it should be… period. This is not right, not moral, and not Minnesotan. These executives should be ashamed of themselves.”