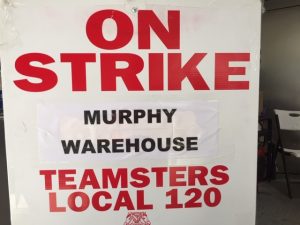 Murphy Warehouse employees have been on strike for nearly a week over the company’s attempt to TRIPLE employee healthcare costs even though the overall cost went DOWN over 4% last year. Both sides have talked about the great relationship between the Union and the company prior to these negotiations. While the situation is very sad it is important to note that the Union and employees did everything we could to avert this situation. Below is the text (and a link to the actual document) of a letter that Local 120 President Tom Erickson sent 13 days before the strike began… he is still waiting for Mr. Murphy to call.

We have not met before, but my name is Tom Erickson. I am the President and Principal Officer of Teamsters Local 120, which represents over 12,500 members in four states, including the employees at your company.

As I am sure you are aware, negotiations between our Union bargaining committee and your hired attorneys have not been going well. I have been told that your attorneys are demanding healthcare concessions even though the company is doing well financially and despite the fact that the costs of the plan have decreased this year.

Our Local Union has had a positive relationship with the Murphy family for decades and I am perplexed by these demands that are being made in your name. I have been around long enough to remember the lean years when your employees took wage freezes to keep the company viable, and when we partnered to educate elected officials on how detrimental a proposed warehouse tax would be.

While I have not been directly involved in the Murphy negotiations to date, it is clear that the dispute between your hired attorneys and my bargaining committee is escalating. To be clear, I fully support the positions our bargaining committee has taken and have approved them taking economic action if necessary to achieve a fair settlement. It is my belief that being a leader means stepping in and stepping up when situations begin to deteriorate. That is why I wanted to reach out to you, leader to leader, in order to offer my phone number (651-343-1723) and tell you that I am willing to talk. With the contract set to expire this weekend, I hope you agree that as leaders, it is our duty to step in and try to find a path forward.